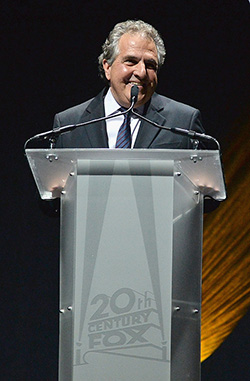 HOLLYWOOD, CA (December 23, 2014) — The Will Rogers Motion Picture Pioneers Foundation announced today that Jim Gianopulos, Chairman and CEO of 20th Century Fox, will receive the 2015 Pioneer of the Year honor on April 22 at CinemaCon in Las Vegas.

One of the longest-tenured studio chairmen in the film industry, Mr. Gianopulos oversees all feature film production and marketing, as well as global distribution of films and television shows through all windows and platforms spanning the Theatrical, Broadcast, Cable, Home Entertainment, Digital and Mobile markets. He has been involved in the evolution of new entertainment media and technologies for more than 25 years, and is considered a leading strategist in the industry.

During his tenure at the studio, he has overseen the release of a broad range of successful films, including the recent hits Gone Girl, Birdman, X–Men: Days of Future Past, Dawn of the Planet of the Apes, The Fault in Our Stars and The Grand Budapest Hotel. Other films during his tenure include Life of Pi, the Night At The Museum films, the Taken series, The Simpsons Movie, Borat, The Day After Tomorrow, Walk the Line, the Star Wars Trilogy, Minority Report, and Moulin Rouge. He also has the unique distinction of having championed two of the biggest gambles, and the two highest grossing films of all time: Avatar and Titantic.

During his time at Fox, the studio has had its most profitable years ever. And this year, Twentieth Century Fox eclipsed the previously held industry box office record with more that $5 billion in worldwide receipts.

Prior to his current post, Mr Gianopulos was Chairman & CEO of Fox Filmed Entertainment and before that, he was President of Twentieth Century Fox International, a position he held since 1994.

Mr. Gianopulos sits on both the Corporate and Fountain Boards of Directors of the Motion Picture and Television Fund. He is also on the Board of Trustees of the X Prize Foundation, a non-profit organization intended to encourage technological development. He has been a long-time supporter of the Pioneers Assistance Fund, as well as other philanthropic efforts in the entertainment community.

“We are extremely grateful that Jim will accept this well–deserved honor and help raise funds for the Pioneers Assistance Fund,” said Chris Aronson, president of WRMPPF and president of Domestic Theatrical Distribution of 20th Century Fox. “He is a leader in our industry with a passion and dedication to the creative process and the desire to assist those who need a helping hand. We look forward to celebrating Jim’s personal and professional achievements at CinemaCon 2015.”

About The Will Rogers Motion Picture Pioneers Foundation

The Motion Picture Pioneers Assistance Fund continues the mission of FMPP by helping individuals from the motion picture community who are encountering an illness, injury or life–changing event. Social workers provide confidential consultations and financial assistance on a short–term or long–term basis, in order to help a person get back to a normal life or continue living with dignity.